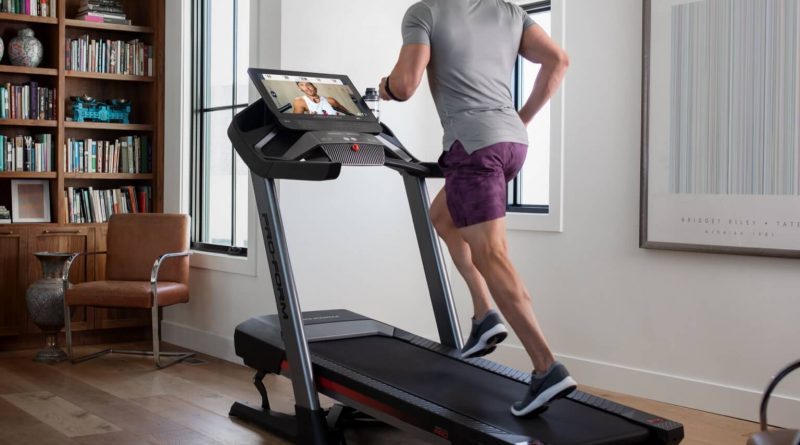 Comparisons
October 16, 2021 FitnessEquipmentGuide this vs that
Note: This post may contain affiliate links.  Click Here to read our full affiliate disclosure.

Trying to compare the Nordictrack 2950 vs Proform 9000 treadmills?  Wondering which is best for you?

You have a great eye. These two treadmills look very similar – with many of the same premium features.

Not surprising – they’re both the top models in the Nordictrack and Proform treadmill lines respectfully.

Both are heavyweights with massive 22-inch, full-color, HD touch-screen consoles. You can stream iFit world trail runs or even LIVE classes to your treadmill every day.

Both treadmills also give you spacious 60-inch long belts and up to 3% decline for added crosstraining.

And they’ve both been around for several years now (however with updates), garnering a lot of positive user reviews.

However if you’re trying to choose between them, there are some key differences that you should know.

This post will help you compare the differences between the Nordictrack 2950 vs Proform 9000 treadmills to help you choose the best option for you:

Prices do jump around a bit.

However, as of this writing the Proform 9000 has the edge here. You can get it for around $1999 direct from the Manufacturer with Free Shipping here.

The Nordictrack Commercial 2950 treadmill has a few more perks with it and comes in a bit higher. You can get it currently for around $2499 direct from the Manufacturer with Free Shipping here.

So as of this writing, the Proform 9000 is better if you’re on a budget as it’s the more affordable of the two. 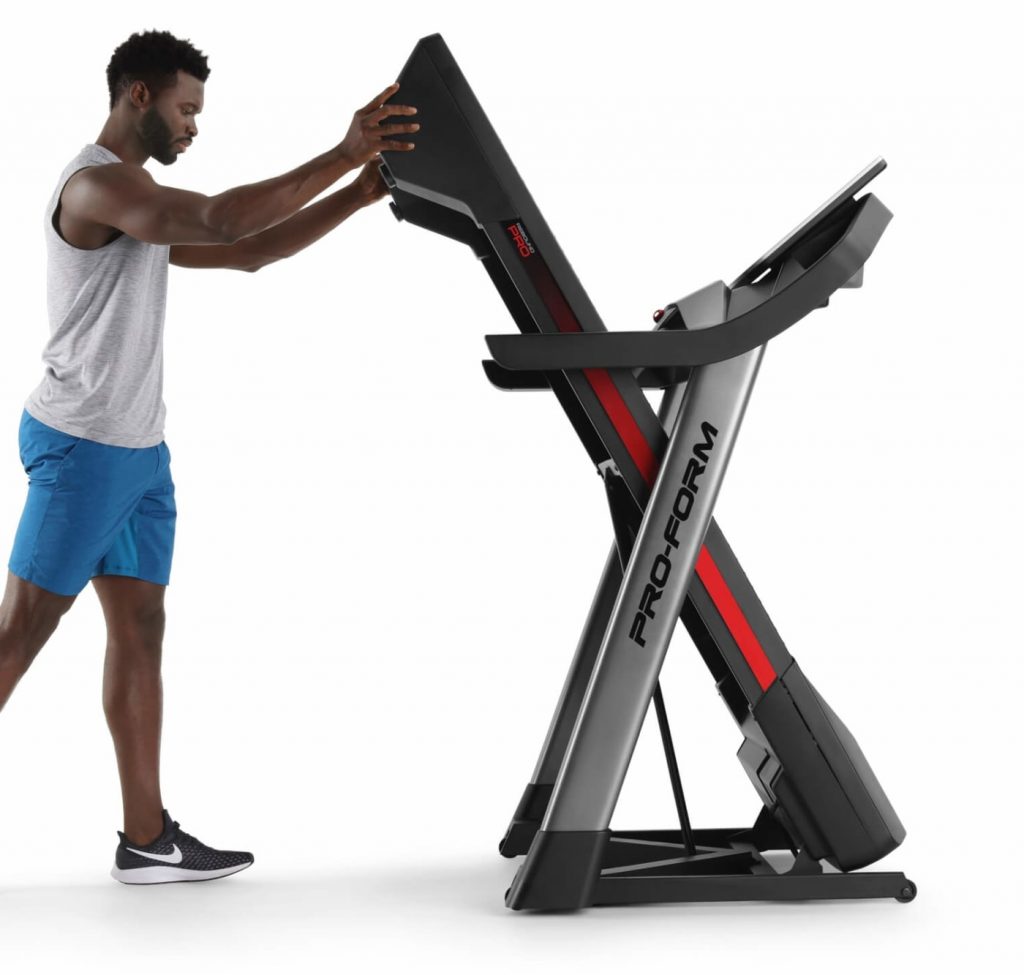 Both treadmills gives you a large, 22-inch, HD touch-screen console. This really makes the iFit world and studio workouts alot of fun to watch.

There are a few differences between consoles and layout however.

So they look similar. However the layouts are a bit different as to where you find the one-touch incline and speed keys.

And there’s another difference.

Basically this means the images are sharper and the treadmill responds faster the the iFit trails and workouts than it did before.

Proform might update the 9000 treadmill console with something similar this year. But as of this writing, they’re not saying anything about it.

Is this a deal-breaker?

Not really – unless you’re really into the fitness tech – but it’s something you may want to know.

Here’s another view of the Nordictrack 2950 console:

Both treadmills give you long 60-inch belts – a great feature for runners or taller users. 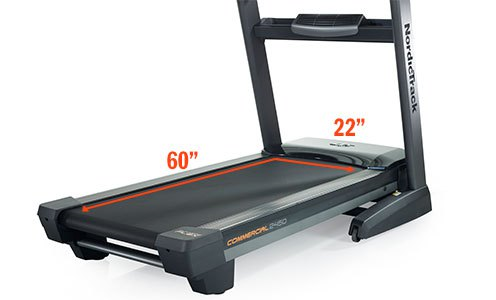 There are several important construction differences between the Nordictrack 2950 and Proform 9000 treadmill that most people might miss if you don’t know what to look for.

These differences are important as they will impact the longevity of your treadmill  – especially if you plan on longer or more intense workouts.

One example of this is seen in the roller size.

The Proform 9000 comes with 1.9 inch rollers whereas the Nordictrack 2950 gives you larger 2.5 inch rollers. Larger rollers help reduce friction on the belt – which helps to increase the life of your belt and ultimately your treadmill.

Another example of construction differences? The machine weight.

The weight of the Proform Pro 9000 treadmill is about 263 pounds – pretty heavy right?

But the Nordictrack Commercial 2950 treadmill comes in almost 100 pounds heavier at around 360 pounds.

You’re probably thinking that the heavier treadmill is a pain to move around – and it can be. (Keep in mind that both treadmills do fold up with wheels on the bottom for easier movement).

But here’s the thing – a heavier treadmill means a more STABLE treadmill.

The Proform 9000 is no slouch either – and it will feel quite sturdy for most people. But if you’re comparing the two treadmills head-to-head, the Nordictrack comes out ahead here.

You do get up to 3% decline on both treadmills – which is great for adding in extra crosstraining to your workouts (or just taking a break by walking downhill for a while).

However there’s a difference in the incline between these 2 machines. 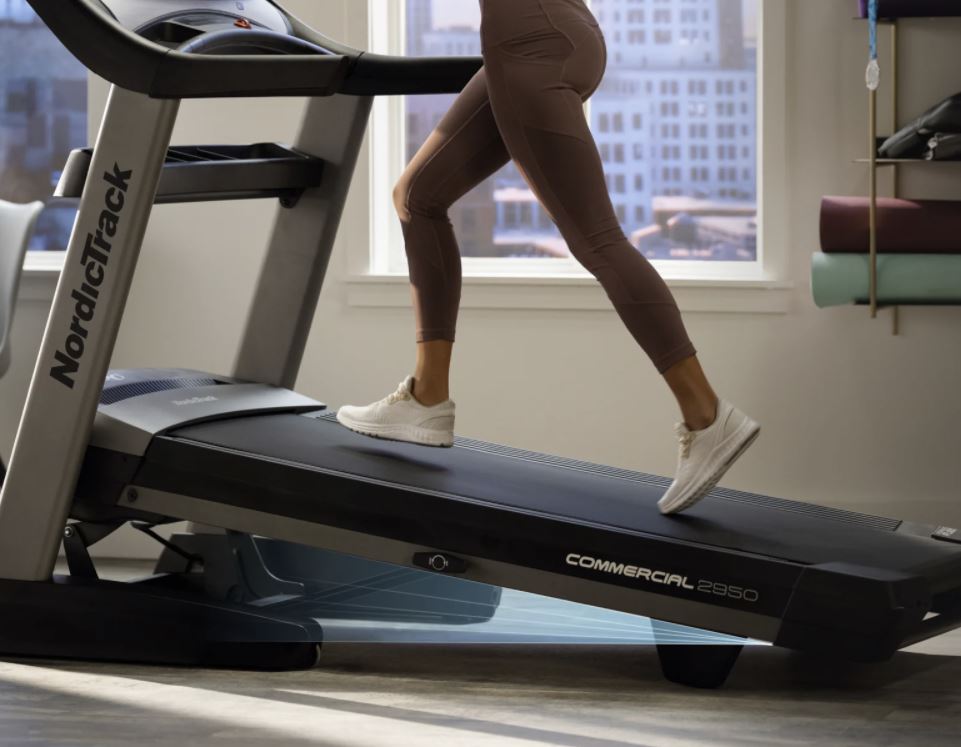 There’s also a difference in motor sizes between the Nordictrack Commercial 2950 and Proform Pro 9000 treadmills.

The Proform 9000 gives you a very respectable 3.6 CHP motor. The Nordictrack 2950 however comes in with a heavyweight 4.25CHP motor.

So that means that, all things being equal, the Nordictrack has more power to handle longer or more intense workouts.

However it’s still fair to say that both treadmills here have strong motors and most people would be fine with the 3.6 CHP motor.

You may have noticed a fairly obvious differene between these two treadmills at first glance. The Nordictrack has the stability storage bar under the console whereas the Proform doesn’t have one.

This is a small difference. However a lot of people like the extra storage space since it lets you store your keys, remote, phone etc as you’re running.

It’s more of an extra convenience and doesn’t effect the treadmill itself. But it’s worth noting.

Well, the Proform 9000 treadmill has the benefit of being more affordable. And it’s still a very impressive machine with a massive touch-screen console where you can stream live classes or run famous trails all over the world.

Plus you also get everything you need for a fun, effective workout like the incline and decline along with high-quality, protective cushioning.

The Nordictrack 2950 treadmill however has the advantage of an upgraded screen with improved graphics.  You get a higher incline for more room to grow.

The 2950 treadmill also gives you stronger construction and a more powerful motor. So, all things being equal, it will hold up a bit better to longer or more intense use.

So it really comes down to what you’re looking for at the end of the day.

Either way, if you use the links below, you’ll get a Full Family iFit membership included with your treadmill for a limited time (good for up to 4 different family members).

Click Here for a iFit included on the Nordictrack 2950

Click Here for a Special Discount on the Proform 9000

Nordictrack 2450 vs 2950 Treadmill Comparison – Which Is Best For You?

Nordictrack 2950 Treadmill – A Good Buy for You? 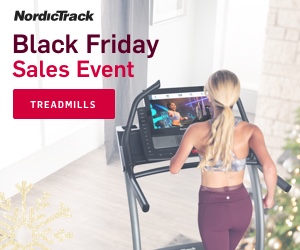